Having a room with stars on the ceiling used to conjure images of nurseries and kid's rooms, but not any more! High end ceiling murals, fiber optics, star scapes and glow in the dark ceiling stars have transitioned to front and center decor applications in media rooms, lounges, bedrooms and spas everywhere. In this article, we'll help you choose a style that fits your vision of an indoor starry sky ceiling.

Perhaps one of the more common applications of star ceilings happens in bedrooms and media rooms. Other uses include dens, built out basements and of course, children's rooms and nurseries.

If you want to explore your own star ceiling ideas, the questions are plenty. What kind? How much will it cost? How long does it take to install or paint it? What are the pros and cons of each type of star ceiling.. and so on.

You can paint your own, apply stick on stars or hire someone to paint it. Some glow in the dark murals are super realistic, but can be costly to have them done.

Here are a handful of star ceiling applications: You can paint your ceiling stars with either normal or glow in the dark paint. You could drill holes directly into your ceiling and feed fiber optics through the holes. That is an intriguing idea, but may end up looking like a bunch of dots.

You could go all out and drill holes into a panel and hang it on your ceiling. I dedicated an entire article on it if you are inclined to take on a DIY project like that.

There are a handful of artists who can paint a very realistic mural on your ceiling with high quality glow in the dark paint, but the vast majority of mural painters are inexperienced with realistic star scape murals, and can render your ceiling a cartoony mess. The good news about that is you can paint over it and start over if you don't like it.

The video below is from Night Sky Murals. This guy apparently travels all over the world painting murals on ceilings and from what I've seen he does an awesome job. I have no idea what his price is for a mural, but the results are astounding. You may want to check out his site.

Painting Your Own Ceiling Mural

You could try painting your own mural yourself. It'll save you a lot of money over hiring someone. If you decide you don't like it, it's less of an issue to paint over it and try again than it would be to paint over someone else's work.

If you need some inspiration about what to paint on your ceiling, here's a convenient Google search of a bunch of indoor star scape images.

Buying and installing pre-manufactured star ceiling panels may be an option. It's way easier than building from scratch, and probably less expensive than hiring out a mural project. Still, it can be expensive to buy a set of panels. You'll still have to install them, too.

You can buy glow in the dark stick-on stars which can be useful. Although a stick on star isn't really very realistic. There is some merit to this type of ceiling though - it's way less expensive than murals or fiber optics, doesn't require electricity to look at (once the stars are UV light "activated") and they look, well, ok.  Self-adhesive stars can serve a very useful purpose, like say, in a nursery for example.

It's hard to say how long stick on stars will stay stuck. We bought a house that had glow in the dark ceiling stars in one of the bedrooms. I have no idea how long they'd been there, but it took a lot to remove them. I seems they might stay put indefinitely.

If you have the old "popcorn" textured ceiling, you can forget about stick on stars. They won't stick. You may want to think about updating your ceiling instead 😉 Fiber optics are widely used and can be a very nice method for getting a star field onto your ceiling. Fiber Optic kits and pre-manufactured panels are a state of the art star ceiling application.

You can drill holes directly into your ceiling and install everything in your attic. You'll need to feed each strand through your ceiling though, and by themselves, may just look like bright dots. Some kits come with varying sizes of strands to help with realism. Different thicknesses of strands vary in brightness, which can give you a sense of depth.

Fiber optic panels are a great middle ground way to go. No drilling into the ceiling (aside from mounting the panel itself).

You can pretty much spend any amount of money you want to. On the low side, around ten dollars for glow in the dark stick on stars. Great for a nursery, but maybe you're thinking of something a little more realistic looking.

For around $35, you can get an array of stick on stars that look a little more realistic. You can get started with fiber optics for under $150.00 and you can take that all the way up to $1000 or even more, depending on the depth of field and the number of "stars" you're after.

You might want to remember, like the old adage goes: "you get what you pay for". A serious, professionally painted mural with high end glow in the dark paint can set you back many hundreds or even thousands of dollars.

Benefits Of Having Your Own Ceiling Star-scape 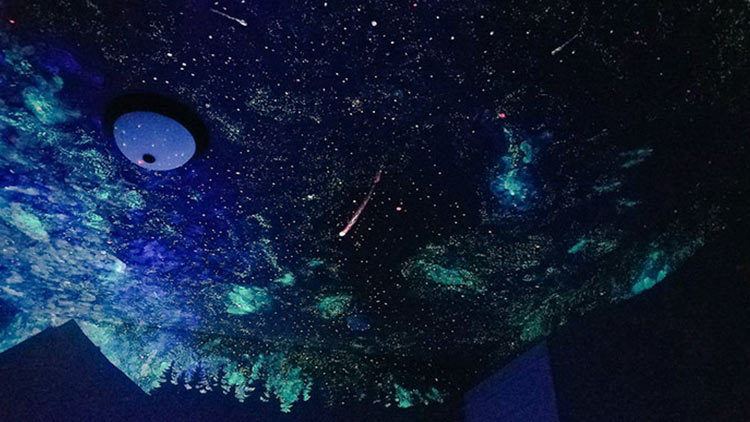 Some people have reported sitting in their star-scape ceiling rooms, just to spend time gazing at it. I can only hope that those people have taken the time, effort and investment required for doing the job right.

Whether they hired it out, built their own ceiling panels, used pre-made panels or had a mural painted, It is fairly certain they took the time, energy and focus required to create what they imagined. At least I hope so.

Crazy cool when it's done right.